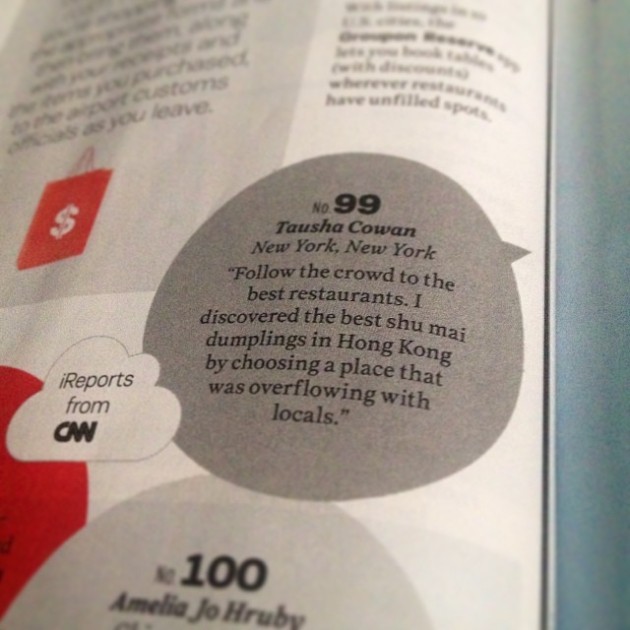 Having a toot-my-own-horn moment here:

A few months ago, I submitted a few travel tips to Travel + Leisure/CNN iReport’s “100 Ways to Travel Better” special, one of which ended up being featured in the December 2013 issue of Travel + Leisure magazine. The tip was based on my first night in Hong Kong, where I had arrived solo for a few days of exploring. I had landed in HK late on a Wednesday night in early March 2013 and, after getting on the MTR train and dropping my bag off at my hotel in Causeway Bay, I wandered over to Jardine’s Bazaar at the recommendation of the hotel concierge to see about some food. It was nearing midnight and yet a ton of people were out and about, going from one place to the next at a rapid pace typical of Hong Kongers. With no idea where to go or what to eat, I walked from restaurant to restaurant until I spotted a place filled with locals. I had always been taught to “follow the locals” when it comes to dining in a different country since they know where good food can be found. It turns out I was right; I ended up at an excellent noodle shop where I indulged in some delicious shu mai dumplings with noodles. It was my first dining experience in Hong Kong and one of my most enjoyable, so much so that I ended up there again on my last night in HK. So, there’s my tip: follow the crowd to the best restaurants. I promise you won’t regret it.